By: Mike Lord (Board member of AHRS)

The RAP radio was found in the storage annex, two years ago, when the Alabama Historical Radio Society was cleaning out older units and floor models that were junk and taking up space.  The provenance of the radio is unknown. Steven Westbrook and I were walking out when he noted this old piece sitting atop a floor model. It was a filthy mess and of no interest to me.  Steven challenged me and said “you can fix that one.”  Ok.  Well, it sat on my cellar floor for two years.

When I finally got around to it, I realized it was a pretty good design with two RF stages and a chrome chassis.  The problem was there was no model number on it.  The only ID was R.A.P., made in London, England.  I finally found a site with a picture and short description.  Another site wanted big bucks for a schematic.  With the help of another Society member, I was able to get the copy of the schematic.

The unit is unique in that there are three sub-chassis bolted together. The purchaser could order three variations of the radio, based on bolting the separate sub-chassis together.  It’s a six-band unit tuning from long wave to 30mc.

There were several major problems.  The speaker coil was open, and the field coil was shorted.  All of the filter caps were nearly completely shorted; the band switch turret was filthy; and several of the contacts were bent out of place.  Lastly, there were only two of the knobs remaining.  With the help of Tom Hayes, new knobs were molded.  After pulling the turret out and redoing it completely, I then replaced all of the filter caps, and replaced some of the burnt wiring.  (Previous problems?)  I next stripped the chassis and cleaned the chrome and washed the variable tuning cap.  Inspection of the IF cans revealed several broken wires.  After that I got it working, however, I kept hearing a popping sound, but was unable to pin that down.  I replaced all caps and resistors that were out of tolerance (all but three).  The popping continued intermittently.  Tubes were ok.  I brought the power up and let it play for several days.  At the same time, I began the process of re-veneering the cabinet. 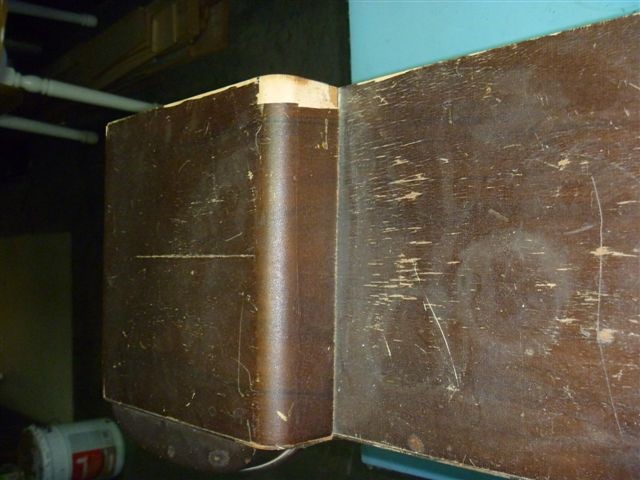 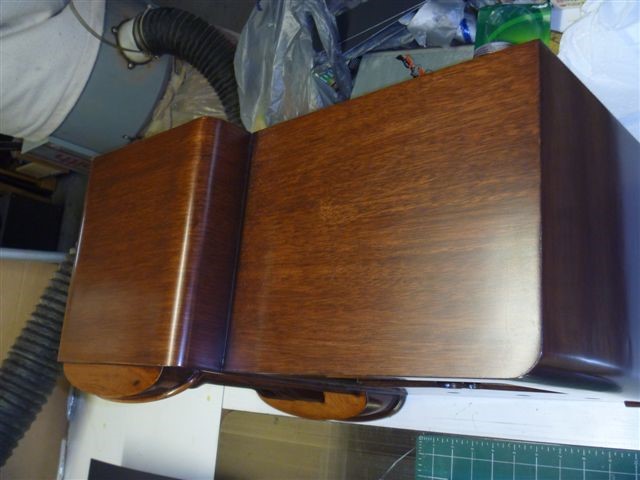 When the cabinet was complete, I installed the radio chassis.  I turned it on and let it play.  After 24 hours, I was doing something else, when I noticed a massive volume of smoke pouring out.  Turned it off and inspected.  The power transformer was burned to a crisp.  I found that the original wiring had a fuse in the B+ line, but no fuse on the transformer input!  The B+ fuse never blew.  Fortunately, I had an exact replacement transformer.  I wired it in, rewired the power supply completely, and rechecked all of the filter caps. I plugged it in and all was well.  No more popping sound.  The unit works great!  Not much selectivity, but the RF section is hot.  I can easily copy stations all through the Midwest and up the East Coast.  Farthest west has been Dallas.  Take note of the dial--very unique--typical for a European radio.

I have tried to research the radio and the manufacturer, but was only able to obtain a basic schematic, which only contained limited information. If anyone have additional information on this radio or the manufacturer, please email me at ahrs2000@gmail.com or spwestbro@bellsouth.net.

a year ago • 4 min read
Past Projects

2 years ago • 3 min read
Past Projects